Only Men Aloud! for Christmas 2009 tour... women and children welcome, too... 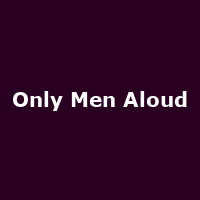 The eighteen-piece choir won the 2008 BBC show 'Last Choir Standing' and have gone down a storm on the tour circuit as well as having signed a five album record deal with Universal Music - the first of which 'Band of Brothers' will be released this October.

The tour kicks-off at Glasgow's Royal Concert Hall on 1st December, before taking the guys to local turf for Venue Cymru and Cardiff International Arena dates on 3rd and 5th December, as well as dates in Norwich, Ipswich, Birmingham, Liverpool, Brighton, Manchester, Portsmouth, Bristol, Nottingham, culminating with a London date at the Theatre Royal in Drury Lane on 20th December.