Gay Pride and No Prejudice for Jane Austen's Guide to Pornography! 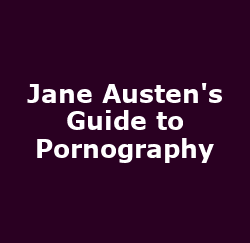 Picture the scene - you're a gay pornographic playwright and you have lost your muse and imagination. What do you do? Go and buy some explicit publications from the local 'book-shop'? Take a trip to a peep-show and gain inspiration from sweaty, naked bodies? Nah....... start an imaginary relationship with England's most strait-laced of novelists, Jane Austen? Perfect. That's bound to arouse a new novel title isn't it? 'Shag & Shagability' anyone?

To find out how on earth this unlikely partnership could possibly work, you need to head down to Theatre 503 @ The Latchmere, Battersea to watch the longest-running gay theatre troupe in Australia, Out Cast, enlighten your eyes and bring a blush to your cheeks with their spicy production, "Jane Austen's Guide To Pornography". It runs from Sep 2nd to 12th on a nightly basis and there are additional matinees on Sat 5th and 12th.

Out Cast presented "Butt-Boy & Tigger" at the Edinburgh Fringe Festival in 2008 and writer Steven Dawson is delighted to bring his bawdy take on a classic character to South London. Watch as Austen loses all sense of sensibilities during the story as "Marianne gets rogered rigid and Darcy sodomizes stableboys". I don't remember my English Literature O Level being like that (OK, Darcy's first name was Fitzwilliam....)! Anyway, the Latchmere / 503 prides itself on provocative productions so you should know what to expect - probably best not to take the kids.

Tickets cost Â£10 - The Latchmere is situated at the corner of Battersea Park Rd and Battersea Bridge.