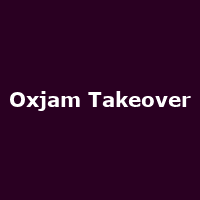 The official line from Oxfam regarding this year's exciting Oxjam events starts thus: "This is Oxfam's month-long music festival with a difference: you make it happen. Each year hundreds of music-lovers like you get involved, all across the UK, to raise money for Oxfam by holding their own events. Oxjam will take place once more across the UK in October 2009". A worthy statement for a very worthy cause and something during which YOU can get make happen, as well as watching the events unfurl. Log on to www.oxfam.org.uk/get_involved for further details.

Brighton is hosting a few Oxjam events including a Battle Of The Bands competition on 20th October at the Hector's House venue - 6 bands will be giving their all for the crowd in order to win the coveted prize of the night - Brighton's Best Band. Then on the 23rd there is a blues night at the city's Loft venue.

But it's Manchester and Cardiff where the 'Oxjam_Takeover.html">Oxjam Takeover' projects will take place. In Manchester, the entire Northern Quarter will be engulfed by several events that will highlight local artistic talent plus various performances for all the family with food and drink provided by local cafes and bars. The date for your diary is October 25th for the big day, however there will be other events announced in the run up to the 'Takeover' including a Hip-Hop Challenge on the 9th (venue tbc). www.oxjammanchester.org is the place to click on for updates. The Oct 25th takeover costs Â£7 which buys a wristband for admission to related events (tickets below).

The Welsh capital is also getting on board with a veritable menu of delights - Cardiff's big 'Takeover' takes place on October 11th and includes a Welsh-language bands' night at Clwb Ifor Bach, a Hip-Hop event at Toucan as well as a roots gig at Dempseys and another set of performances by The Screenbeats and more at Y Fuwch Goch. The cost of your wristband for the 'Takeover' in Womanby Street in the city is Â£8 - available now.

If you can't wait that long to help Oxfam then Glasgow sees the popular "Ceilidh In The Buff" return to the Buff Club on September 5th for an evening of traditional Scottish music and convivial merriment. Tickets cost just Â£10 and are available now (see below).