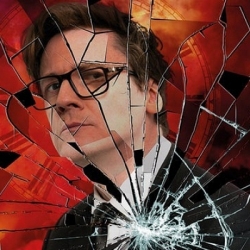 After a successful run of 29 dates at the Hammersmith Riverside Studios last autumn, the Irish stand-up comedian, voice over artist and TV personality (whose regular TV appearances include Channel 4 comedy quiz '8 Out of 10 Cats' and BBC 2's 'Mock the Week' and 'Never Mind The Buzzcocks') is to return to the West End for a residency at the Vaudeville Theatre as of September 7th.

Due to the foreseen success of the run, Byrne has been offered an extended stay of 23 dates instead of the 11 originally scheduled (between September 7th and September 19th), until October 3rd.

Byrne will then proceed to touring the UK from November 2nd to December 3rd. His new live DVD, 'Different Class', recorded at The Kings in Glasgow last March, is out on November 23rd.

Tickets for the Vaudeville run cost £16.00 + booking fee and are on sale now.