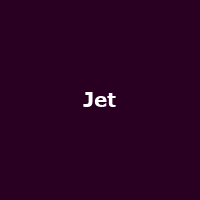 Shaka Rock was recorded between Miami, Brooklyn, Austin, Sydney and Melbourne, with the band working side by side as co-producers with Chris "Frenchie" Smith to create what Nic Cester calls the band's "most honest so far." In its first weeks,"She's A Genius," the first single off of the highly anticipated album is the #1 most added rock song in Australia, the top 5 most added in the US and the #1 most added rock song in Canada. It has already charted in the US at multiple formats.

Having established themselves as an international band with 4 million albums sold world wide, Shaka Rock closes the gap between the raw roots of Get Born (2003) and the grace and melody of Shine On (2006). Shaka Rock captures the charisma and energy of classic rock and roll with just enough swagger and contemporary flair to create something distinctively JET.

Chris Cester says, "I can say that the band is thrilled with Shaka Rock in every conceivable way. We've had a don't think twice attitude throughout the making of this record which continues as we get ready to release it. I think Shaka Rock is like when TV went colour. It's our musical equivalent. There are moments on this record that are just pure...and moments that just rock harder than we ever have before."

'She's a Genius' is out now on CD, vinyl and digital, 'Shaka Rock' comes out on 7th September and is available now for pre-order (check the links in the sidebar - right).

The boys will be supporting the album this September with their first National tour in three years, starting in Notttingham's Rock city, covering Manchester, Glasgow, Leeds, Wolverhampton, Bristol, and finally the Forum in Kentish Town (London). Tickets are on sale now, costing Â£16 for all dates, except the London date, which costs Â£18.50. All tickets + booking fee.