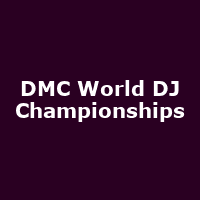 The DJing event of the year, the DMC World DJ Championship is being held in London's Indig02 on September the 11th and 12th. Celebrating its 25th anniversary, the event is set to be awe-inspiring. Last year's international and UK champions, DJ Switch and DJ Rasp are defending their titles against the hottest new talent, whilst Team Battles will determine who will follow in the footsteps of the competition's greats, the Scratch Perverts and C2C.

The event is renowned for bringing fame and respect, some of the previous champions include Kanye West's DJ A-Trak, Q Bert, Cash Money and MixMaster Mike from the Beastie Boys.

Kick-starting proceedings on the Friday 11th is the "Battle For Supremacy", which will see last year's World champion DJ Switch face former Supremacy title holders. DJ Yoda will also be mixing things up (pun intended..) on the day, with a special AV set.

On the Saturday, it's time for the biggie: the DJ Championship World Final, with DJ Jeppa flying the British flag.

Talent and Innovation is guaranteed by the truck load, make sure you get a ticket while you can; security has tightened since the ram-raid attempt at Wembley in 1991, although the Boo Ya Tribe may not be there to help-out this time...