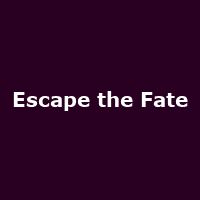 Recent Alternative Press cover stars, US, Las Vegas rockers ESCAPE THE FATE can now announce a UK support tour in November and December with the mighty Download festival slaying Hollywood Undead. The date's run between the 30th Nov and the 6th December - on sale now from Â£12.50 + booking fee (see below).

These dates follow on from a number of massively successful, sold out UK tours, and also coincides with the bands new single '10 Miles Wide' which features (both on the track and in the video) Buckcherry vocalist Josh Todd. The video (above, right) features cameos from the likes of Ron Jeremy and Benji Madden from Good Charlotte.

The band released the massive, hook-laden, breakdown-filled second record 'This War Is Ours' earlier this year as a follow-up to their acclaimed and top 20 Billboard hit 2006 debut 'Dying Is Your Latest Fashion'. The album was released through the legendary label Epitaph (Bad Religion, One Day As a Lion, Story Of The Year, Converge).

This support slot follows on from the mammoth US Warped Tour, sold out US tours, appearances over the summer at the UK Give it a Name festival, a US tour with support from Black Tide, as well as a recent US tours with the likes of Bullet for my Valentine and Chiodos.