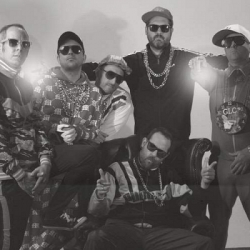 Welsh comedy rappers Goldie Lookin' Chain are to embark on a UK-wide tour this December.

The 'Office Party' tour will begin at Bristol's Thekla on 6th December and the Newport boys will play almost non-stop through a total of 15 UK dates, taking in venues including Glasgow's King Tuts, Newcastle's Academy, Nottingham's Rescue Rooms (14th), and finishing at London's Islington Academy (21st).

The next release due from Goldie Lookin' Chain comes as single 'Everybody is a DJ' on September 28th. It will come with Musicshake remix software that will enable fans to add new vocals, remix the track, and even sell their new (improved?) version on Musicshake's website with all proceeds going to the band's chosen charity Shelter Cymru. The band is due to appear at the twin V Festivals in Chelmsford and Stafford, as well as at Bestival in early September.