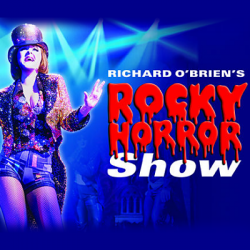 It just runs and runs and takes a jump to the left, much to the delight of audiences all around the world and once again, the cast changes and a new production hits the road. Yes, the Rocky Horror Show with its sweet transvestites and the infamous Frank N Furter declaring that 'it's the pelvic thrust that will drive you insane', returns for an extensive 'step to the right' locations (sorry).

The 1st port of call isn't a port at all, it's a London suburb by the name of Wimbledon and the fun starts from September 17th up until the 26th at the New Wimbledon Theatre. There are several dates in several towns and cities right the way across the UK including Stoke, Bromley, Liverpool and Glasgow before the currently announced leg ends on February 23rd 2010. Each location will get a minimum of 6 nights at a ticket price of around £26 ( this is an average price - check venues first). Dates are below. There is even a run confirmed for November 20th to December 5th 2010 in Grimsby (ticket availability TBC)

Dammit Janet - Don't dream it be it...and enjoy this new exciting production of Richard O Brien's classic night of fun and plenty of frolics of a slightly risqué nature....