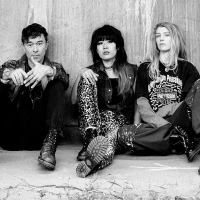 4AD's new art-band hopefuls, The Big Pink, have a cracking new single called "Domino" released on September 7th with the eagerly-anticipated debut album, "A Brief History Of Love" following a week later. However, both are available now as part of a teaser campaign on their website (linked via 4AD). The album offer is only available for 1 week until August 10th!

BBC 6 Music have already embraced the anthemic song, which harks back to the mid-80s 4AD heyday of classic powerful indie hymns as performed by Cocteau Twins, Xymox, early Dead Can Dance, Dif Juz and bits of This Mortal Coil. But, the entire album is seriously worth a listen and you can 'try-before-you-buy' as from now.

This is quite a brave strategy and shows a considerable sign of confidence on the part of the band and the label. It might also stop unscrupulous sharing of files, who knows? After all, they would hardly offer this facility if the record is crap - which it isn't.

Tracks like the epic "Crystal Visions" and "Too Young To Love" show a band oozing a maturity that doesn't often seep from the brains of a band so new. Previous single "Velvet" and "Tonight" are tight and sharp and fidgety like crabs in a bag.

To further support these releases, Big Pink play Reading and Leeds towards the end of the month before embarking on a whistle-stop global jaunt at a few festivals. They are due to return to the UK for a raft of dates in October including London's Electric Ballroom - sure to be a Big Pink sell-out.