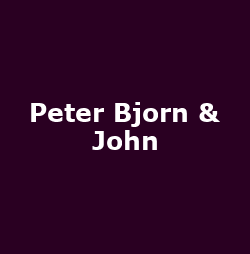 After a gig at the newly re-opened Islington Garage last June, the Swedish trio Peter Bjorn and John will return for a tour in October. PBJ will kick off at the Electric Ballroom in London on October 1st, then head to Liverpool Academy on the 2nd, the Dublin Tripod on the 3rd, The Cockpit in Leeds on the 5th, Birmingham Academy on the 6th, The Leadmill in Sheffield on the 7th, The Waterfront in Norwich on the 8th, before terminating at The Wedgewood Rooms in Portsmouth on October 9th.

The genius pop trinity released their critically-acclaimed fifth album, 'Living Thing', in March, off which three singles 'Nothing to Worry About', 'Lay It Down' and 'It Don't Move Me', have come out so far.