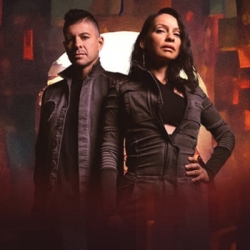 "11:11" was recorded in Ixtapa, Mexico. The album has been produced by Rodrigo y Gabriela, with John Leckie co-producing one of the tracks. The album was mixed in Wales and London by Colin Richardson, best known for his work with Slipknot and Trivium.

Comprising 11 new self-written compositions, "11:11" is Rod & Gab's personal "Gracias" to a first XI of musicians, both past and present, who have inspired them along the way. Alex Skolnick of metal gods Testament guests on the album, as do widely respected acoustic veterans Strunz & Farah.

"11:11" is the long awaited follow up to 2006's "Rodrigo y Gabriela", which has so far enjoyed worldwide sales in excess of half a million albums.

The duo graced the stages of Lovebox and Secret Garden Party this month, as well as Dolan's and CIT School of Music in Limerick and Cork respectively, and will be playing the Electric Picnic in Ireland on 4th September. The band are just at the tail end of a European tour, and have a number of US dates ahead of them this September.