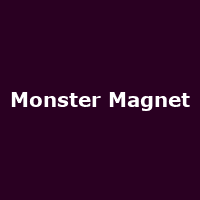 After Dave Wyndorf, the guitarist and vocalist of the band suffered a drug overdose in 2006, Monster Magnet, the Stoner Rock visionaries are back to rampage through the UK this December. They are being supported by the upcoming Psychedelic Rock band 'Karma to Burn'.

The American band from New Jersey have a lot of history. Struggling to make their break in the 90s, their hard work finally paid off when Powertrip, MM's fourth album reached gold sales status. Since then they have become one of the most influential bands in the Stoner Rock scene.

The rock veterans have a seven album strong discography, their most recent being '4-Way Diablo'. The album touches upon Garage Rock and Psychedelia in it's opening title, but still holds the trademark Monster roar in the tracks 'Wall of Fire' and 'You're Alive'. This reaches out to a larger fan base and keeps the hardcore MM fans satisfied.

Monster Magnet are headlining the 'Hard Rock Hell' festival on the 4th of December and are playing in seven other venues Nationwide from the 5th, including London's Koko, Leamington Spa and The Garage in Glasgow. Tickets go on sale this morning (Weds 29th July) at 9AM costing Â£15 for regional dates and Â£17.50 for the Koko date in London.