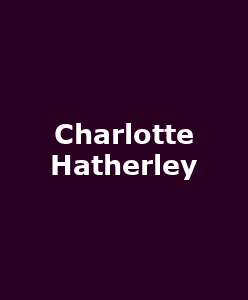 Charlotte's career started at the age of sixteen when she played in the indie rock band Nightnurse. The band had minor success when their single 'Skirt' reached number 11 in the UK independent singles charts and won the NME new bands award after only being together a short time.

Charlotte hit it big when the alternative rock band Ash were looking for a fourth member to improve their live performance. She contributed to the Nu-Clear Sounds album having written a b-side 'Grey Will Fade' on the single 'There's a star'. This track was highly acclaimed amongst critics, and lead to her solo career, the track becoming the lead title of her own album.

Catch a taste of Hatherly's music from her albums 'Grey Will Fade', 'The Deep Blue' and her upcoming album 'New Worlds'. Tickets are a steal as all dates cost just Â£10 + booking!