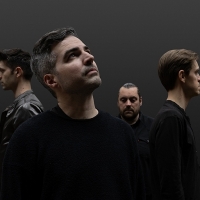 The Boxer Rebellion have today announced a groundbreaking collaboration with HMV, which will see the retailer act as a strategic partner for their second album UNION. In the first deal of its kind, HMV will advance the costs of the album and give it promotional support, in exchange for a share of the revenues. The partnership allows The Boxer Rebellion to remain proudly independent, and continue to find innovative ways to engage with their fans.

UNION will be released on CD on 14 September in HMV and selected independent retailers, and can also be pre-ordered via hmv.com and other online stores in both physical and digital formats. The release will be supported with a week of live in-store performances and album signings at HMV stores around the country, including the flagship Oxford Circus store.

The Boxer Rebellion will also commence a UK tour on 22 September, for which HMV will have an exclusive window on ticket sales. Tickets go on sale at hmv.com on 23 July, and will also be available to fans as part of a special album bundle for just Â£15 (including the ticket's booking fee). The band most recently performed on Glastonbury's Other Stage and will also be playing thelondonpaper's Headliners Festival on 17th September.

Since being signed on the back of an explosive Glastonbury performance in 2003, The Boxer Rebellion have infamously suffered a stop-start career at the hands of a volatile music industry. The aptly-titled and self-produced UNION is the triumphant result of what can be achieved when ability, commitment and relentless drive converge towards a shared, immovable goal. From the opening assault of 'Flashing Red Light Means Go' through the insistent 'Spitting Fire' to the redemptive closer 'Silent Movie', the overriding effect of UNION is of going through an emotional storm and arriving replenished on the other side.

UNION follows the band's 2005 debut LP EXITS on Alan McGee's Poptones/Mercury imprint. NME proclaimed at the time, 'This band can alter your life.' Kerrang! wrote, 'If you're crying out for substance in music, The Boxer Rebellion are here to soothe your soul,' and both The Fly and MusicOMH dubbed the album 'flawless'. As their label imploded, and singer Nathan Nicholson found himself critically ill on a life-support machine, EXITS took on a life of its own, passed quietly from person to person until it had amassed an army of feverishly devoted fans. Following Nicholson's difficult but eventual recovery the band continued to perform live, and it was at these decisive shows - always underpinned by new songs well before they could ever be recorded - that the spirit of a new album came into being.

Ultimately taking matters into their own hands, The Boxer Rebellion self-released UNION through iTunes on 13 January 2009, with lead track 'Evacuate' becoming the first ever global iTunes Single of the Week and amassing an astonishing 560,000 downloads in seven days. UNION went Top

5 on both iTunes US and UK Albums Charts within 48 hours, resulting in The Boxer Rebellion becoming the first unsigned band to break into the Billboard Top 100 Albums Chart on a digital-only release. UNION also knocked My Morning Jacket off the iTunes US Alternative Albums No.1 that week, and at one point was outselling the likes of Coldplay and Kings of Leon.

The album release will be preceded by a limited-edition double A-side single, 'Semi-Automatic/Flashing Red Light Means Go', released 7 September on 10" vinyl picture disc. Only 500 copies will be pressed.