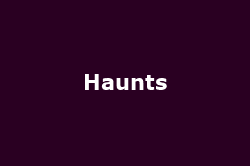 London based quartet HAUNTS are back with a storming new EP featuring 'Love Is Blind' and remixes from Black Teeth, L'Armour La Morgue and Pics Plox. 'Love Is Blind' - out on 3rd August - will be the final release from their stunning self-titled debut album, released last November on Black Records.

Since the release of their aforementioned debut opus, messieurs Banks, Woodcock, Mitchener and Grover have clocked up shows alongside the likes of White Lies, The Eagles Of Death Metal,Crystal Castles and Yo Majesty. Haunts members Banks and Alex have also remixed the likes of The Enemy, Elbow, Animal Kingdomand Marina & The Diamonds under their Black Teeth guise.

Never ones to shy away from the darker side, the supporting remixes from Black Teeth, L'Amour La Morgue and Pics Plox perfectly compliment the dirty electro side Haunts have always delivered with a stylish stomp and swagger.

Haunts will be hitting the road with SHARKS/// in support for a short tour in August.