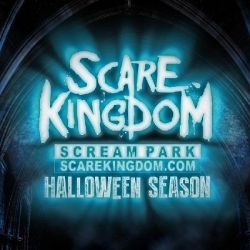 The leading UK Halloween entertainment company, AtmosFEAR are teaming up with Hawkshaw Farm Park to follow up the success of last years sell-out attraction 'HEX in the Harvest'. AtmosFEAR are opening a terrifying new Scare Attraction, 'Scare Kingom Scream Park' in Blackburn, on October 2009.

AtmosFEAR specialise in creating hair-raising live experiences based around a theatrical story in themed environments. The locations are swarming with scare actors, theatrical lighting, blood curdling sounds and special atmospheric effects, such as gusts of wind, temperature fluctuation and nasty smells.

The park will have several ghoulish attractions, including 'Dead Alive', an outdoor episode based in an 8 acre maize field, experienced in total darkness, 'Blood Bath', an indoor event featuring a lunatic asylum and an old creaking farmhouse, or for the more timid souls, daytime fun, spell casting with witch sisters 'Toil' and 'Trouble'.

Scare Kingdom Scream Park is located on the A59 near Preston, accessible via junction 31 on the M6.