All American Rejects to tour the UK in October 2009 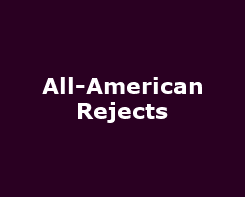 The Oklahoma power pop quartet, fronted by Tyson Ritter (another of Agyness' rock star exes, apparently...), have just announced a mini tour of the UK for this autumn.

After an extensive States and Australia tour this summer, promoting their third studio album, 'When The World Comes Down', released last December, and off which four singles have come out so far (the latest being 'The Wind Blows' last April), All American Rejects will play four dates in October: London Shepherd's Bush Empire on October 14th, Manchester Academy on October 15th and Nottingham Rock City on October 17th and Glasgow Borrowlands on October 18th.

'When The World Comes Down' was produced by Eric Valentine, who has worked with the likes of The Lost Prophets, Queen of the Stone Age, Third Eye Blind and Good Charlotte, among others.