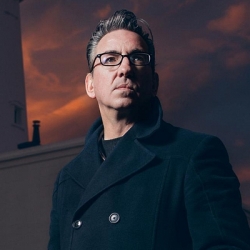 The Sheffield crooner has announced a swathe of live gigs for October in support of a brand new album due for release on Mute on September 21st . Starting in the beautiful West Yorkshire town of Holmfirth on October 1st, the rest of the tour takes in Manchester, Leeds and London's Shepherds Bush Empire, as well as less obvious towns like Ipswich and Bexhill.

Hawley has chalked-up a raft of critical acclaim for his romantic, rockabilly strumdrum tunes and rightly so - he knows where the heartstrings are and he knows how to tug 'em!. This tour is designed to draw attention to his new batch of songs due for release under the tentative title of "Truelove's Gutter" on the loyal London label, Mute. He says "Don't let the calendar push your buttons, don't buy flowers just on Valentine's Day. It's about being honest". And who can argue, apart from the lying, cheating bastards in life?

The live dates are sure to feature older material from the critically (and publicly) acclaimed set "Coles Corner" and the less fawned-over "Late Night Music" - whatever...... Mr Hawley is sure to bring his own infectious humour and song-smithery to the proceedings no matter where you see him.

Check out the dates below for details and be prepared for a tear-jerking evening.