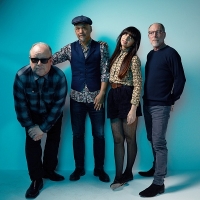 All of you U.S indie fans be aware that gigantic pioneers, The Pixies have announced four London dates for this autumn.

The super cool middle-aged quartet, starring Frank Black and Kim Deal will play a residency at the Brixton Academy consecutively from October 6th to October 9th. They will also be gracing the cities of Dublin on October 1st and 2nd and of Glasgow on October 4th.

Although the golden Bostonians officially reunited back in 2004 following an 11-year-long breakup, they have only done so on stage, their last studio album, Trompe le Monde, dating as far back as 1991.

This said, while keeping us in waiting for long overdue new material, they will release a deluxe box-set of past-but-timeless masterpieces, entitled 'Minotaur', on pre-order since June 15th.