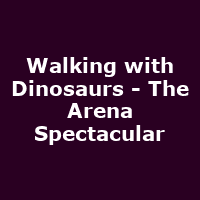 Tomorrow (Weds 1st July), the oldest show in history hits the UK -Walking with Dinosaurs - The Arena Spectacular comes to life in arenas across the UK.

Featuring fifteen life-size dinosaurs, the show has already been seen in Australia and America and makes it's UK debut at the SECC on 1st July. The idea for Walking with Dinosaurs was first conceived by British screenwriter and director back in 1996, becoming a reality on BBC screens in 1999. The arena show was created in conjunction with internationally renowned designers and scientists and features ten hydraulic beasts - the tallest of which is the Brachiosaurus at 36 ft tall, which is also the longest at 56 ft. The Ornithocheirus has a magnificent wing span of 38 ft and the ferocious Tyrannosaurus Rexes - of which there will be two - stand at 23 feet tall and 42 feet long.

Tickets start at Â£20 and are available for most of the dates, but note that the SECC tickets are now only available directly from the SECC box office: www.secc.co.uk.