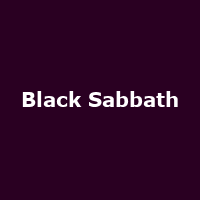 In 1970, four guys from Birmingham Tony, Bill, Ozzy and Geezer released their debut, eponymous album 'Black Sabbath' two years after their 1968 formation, which - pretty-much - started a new genre: Heavy Metal. The rest, as they say, is history, and you can get your hands on part of that history from today with the release of two special edition albums.

Commercially, 'Black Sabbath' did very well, selling one million copies, but - as with many records ahead of their time - it was not well received critically at the time, with reviewers just not getting it. Fast forward almost forty years, and time has been kinder to this influential album, with it adorning many "best album" lists from various music magazines - let alone its revered status in the minds of metal bands all over the universe.

Sabbath then went on to release two further stonkers within two years: 'Paranoid' and 'Master of Reality' - both of which, along with their debut were produced by Rodger Bain (who also produced Judas Priest's debut). Paranoid remains their best-selling album, and Master of Reality didn't do too bad, either - going double platinum in the year of it's release (1971), selling over two million copies - in fact it had already achieved "gold" status on advance orders. Like its two predecessors, 'Master of Reality' is also name-checked by many a-rock band - past and present - and also graces many "best album" lists.