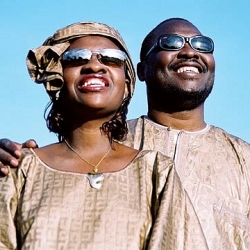 Urban troubadour Jamie T and Slow Club will open the fest, which will run each night throughout July at the Camden Roundhouse, with the likes of Oasis, Kasabian, Placebo, Bloc Party, Bat For Lashes and Friendly Fires, among others.

A few acts have been added to this starry line-up, including Oi Va Voi (fronted by the soulful pin-up Bridgette Amofah) and Tinariwen on July 9th, The Temper Trap and Mumford & Sons on July 12th, and July 28th Amadou and Mariam aka 'the blind couple from Mali' that every festival wants on their bill ( as we speak they've just played Glasto and will perform at the Manchester International Festival on July 7th and 8th and the Big Chill festival on August 9th after supporting their number-one champion, Damon Albarn and his resurrected band Blur in Hyde Park this coming Friday (July 3rd). The act for July 25th remains to be confirmed but should be announced very soon.

Let's remind you that the iTunes Live Festival is one gigantic bargain as all to tickets are free to be applied for online at http://www.ituneslive.co.uk.

What are you waiting for?