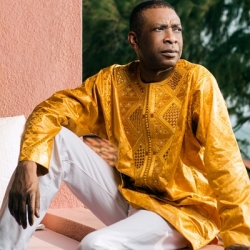 Just when you thought it couldn't get any better, it has: Senegalese superstar Youssou N'Dour and his band Super Etoile de Dakar will descend on WOMAD on Sunday, intent on wowing the festival with their infectious urban mbalax rhythms and irresistible Afro-pop dance grooves. A statesman and social commentator, N'Dour is one of the most celebrated African musicians in history. The Super Etoile are probably the most popular African band in the world. Together they are simply incredible.

Early birds, take note: Jamaican demigods and ska pioneers The Skatalites will have all in a dancing mood on Thursday when they headline an evening of compelling acts. Founded in the 1960s by session musicians who'd played for the likes of Bob Marley and Peter Tosh, The Skatalites have gone on to win Grammies and global notoriety. Their skanking live performances are still rated as among the best that ska, reggae and rocksteady music have to offer.

There'll be Music from the Penguin Café on Thursday, too; founded by Arthur Jeffes, son of the late Penguin Café Orchestra founder Simon Jeffes, this acclaimed nine-piece provide a fresh take on the original ensemble's sound. Influenced by folk, bluegrass, avante garde classical music and pop, the PCO still managed to seem quintessentially English; the prodigiously talented Music from the Penguin Café move the sound forward with zest, flair and some new compositions.

Opening WOMAD Charlton Park on the Open Air stage is a collaborative project featuring dynamic UK/Colombian outfit Colores de Mi Tierra, the UK's acclaimed Shlomo and the Beatbox Choir, six local Malmesbury primary schools and Malmesbury Secondary School. A family group, Colores seek to develop the rhythms, dances and melodies of Colombia's Caribbean coast. Shlomo pushes the boundaries of beatboxing as an art form. The creative result of workshops and rehearsals held throughout June and July, this will be a performance to treasure.

WOMAD is so much more than just a first class world music festival and returning this year will be the popular 'Taste the World' tent where artists show off their cooking prowess and, more often than not, it turns into a impromptu gig. The Drum and Dance Tent makes a welcome return: think everything from early-bird yoga sessions and salsa lessons to night owl happenings. And for those who fancy a luxurious moment to themselves the WOMAD spa - complete with cocktail bar - is the place to go.

WOMAD promises to be bigger and better for kids and young people than ever before. The World of Kids will have the usual comprehensive programme of workshops, entertainment and activities; the magnificent Children's Parade is always a festival highlight. WOMAD continues its well-established place as the best festival for the whole family: all children aged 13 and under get in for free.

The WOMAD Festival experience is not about the familiar, the tried and tested; its essence is in the discovery and enjoyment of a totally unexpected artist or a style of music which would never otherwise have been encountered. It's a magical, musical melting pot, enriching all who experience it.

WOMAD returns this summer to Charlton Park in Malmesbury, Wiltshire, from 24 to 26 July 2009. Tickets are on sale now, costing £122 for an adult weekend ticket, £59 for teenagers for the weekend, £60 for a day ticket and free entry for 13-and-unders!