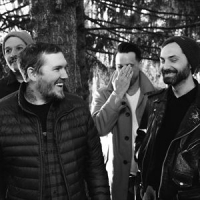 New Jersey rockers 'Gaslight Anthem' are prepping-up for what is to be their dream gig with the Boss himself (Springsteen, not God) by covering the great man's 'Backstreets'. Lead singer/guitarist Brian Fallon covers it and also gives an interview on the band's official website where he said that the song gave him hope when he was young to reach beyond his small town life. That's Bruce for ya. They get to support their idol on 28th June at Hyde Park when Bruce and his E Street Band headline with extra support from the Dave Matthews Band. As well as that, Gaslight Anthem are playing other festival gigs at Glastonbury, T In The Park and Ireland's Oxegen. Check out the band's rather good cover of the Springsteen classic (video, above). The guys will be on-stage (John Peel stage) at around 5:25PM on Saturday at Glastonbury and around 3PM on Sunday for the Hyde Park gig.

The band also released latest single 'The '59 Sound' this week - the title track from their second album, released last year.