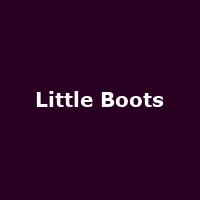 Little Boots has announced an October 2009 UK tour starting at the Roadmender in Northampton on 21st October.

2009 is proving to be Little Boots AKA Victoria Hesketh's year, with her topping the BBC's 'Sound of Music 2009' poll and receiving the critic's choice for the BRITs. She will be embarking on numerous summer festival appearances, which started last month at Newcastle's Evolution festival and continues at Oxygen in Dublin, T in the Park in Scotland, Field Day and Underage Festival both in Victoria Park in London, the Reading and Leeds festivals and Bestival on the Isle of Wight. She'll also be jetting-off around the globe with festival and tour dates in Denmark, Japan, Australia and America, before her October UK tour. The UK tour commences in Nortampton on 21st November, moving on to Sunderland University on 23rd, Preston's 53 Degrees on 26th, Liverpool's Academy on 27th, The Junction in Cambridge on 29th and the Wulfrun Hall in Wolverhampton on 30th October.