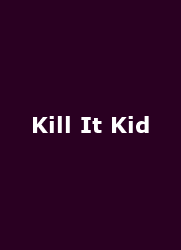 Here's a newbie band that did not need the nod from the BBC Sound of 2009 panel to make waves.

Formed at uni over a year ago, the quintet is dubbed by the likes of Clash, Q and Music Week as a "vibrant raw talent that demands attention" -to paraphrase them, and has been likened to Tom Waits meets The Raconteurs meet Gomez. Tastefully intriguing, uh? Well, here's your chance to feed your curiosity and assess whether the hype needs be believed as Kill It Kid have announced a few UK dates, starting with a support slot for Feeder at Warwick University on June 25th, followed with the Cockpit in Leeds (June 2 6th), Escobar in Wakefield (June 27th) , Edinburgh Sneaky Pete's (June 28th) , Glasgow Twisted Wheel (June 29th) , The Duchess in York, The Social (July 1st) , St Pancras Session (July 2nd) and the ICA (July 9th, alongside Twilight Sad and We Were Promised Jetpacks) in London, Zanzibar in Liverpool (July 16th) , Start the Bus in Bristol (July 30th) and an appearance at the Y-Not Festival in Derby on August 1st. Then, from August 6th to 10th, they'll be supporting Texan songstress Brandi Carlile on her UK tour.

Tickets for Kill It Kid's headlining gigs all cost under a tenner- check venues for availability.

KIK, as we'll soon grow to pet-name them, will also release their second single, 'Bursts It Banks' in 7" and download on August 3rd, in advance of their much anticipated debut LP, produced by Ryan Hadlock (The Strokes, The Gossip), expected this autumn.