Dreamboats and Petticoats for West End stage from July 2009 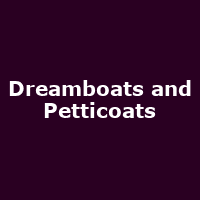 The new musical 'Dreamboats and Petticoats' hits the West End at the end of July. Based on the two bestselling compilation albums of the same name, which feature 1950s and 1960s rock'n'roll classics by the likes of Roy Orbison, Eddie Cochran and The Shadows, as well as hits such as C'mon Everybody, Shakin' All Over and Let's Twist Again, 'Dreamboats and Petticoats' will run for a limited season of seven weeks, from July 27th to September 12th, with previews from July 22nd, at the Savoy Theatre.

In 1961, emotions run high as talented young musicians Norman and Bobby compete to win the hearts of their adoring female fans - and more importantly, the gorgeous Sue. But when shy Laura shows that she's no slouch on the piano, rock 'n' roll fame beckons...

The show premiered earlier in the year with a regional tour, taking in Bromley, Glasgow, Edinburgh and more, and is currently showing at Liverpool's Empire until the end of the week. The show then moves onto Richmond and Sunderland before hitting the West End - filling the void left by Carousel, which ended prematurely last week. After the West end run, the show returns with a regional tour commencing in November.