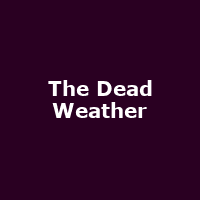 The Dead Weather
Q: How many bands does a guitarist need? A: three, if the guitarist in question happens to be called Jack White.

Not content with being the chief axe man for The White Stripes and The Raconteurs, earlier this year the American musician, singer and songwriter joined-up with Alison Mosshart from The Kills, guitarist Dean Fertita from Queens of the Stone Age and bassist Jack Lawrence from The Raconteurs/ The Greenhornes to form alternative rock band The Dead Weather.

This Monday (22nd June) the band will play an exclusive live gig (not ticketed) in London, which will be streamed via Radiohead/ Air/ Zero 7 producer Nigel Godrich's 'From The Basement' series on the website www.ftblive.com from 9PM.

Additionally, there will be special screenings in four record stores across the UK: Rough Trade East in London, Piccadilly Records in Manchester, Rounder Records in Brighton and a record store TBA in Scotland.