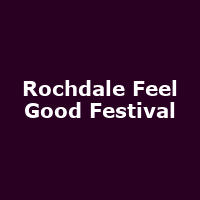 On July 10th & 11th Rochdale will be hosting The Feel Good Festival.

The two day free event is a celebration of entertainment and culture featuring a high profile line-up of celebrity chefs and top musical artists.

Celebrity chefs Aldo Zilli and Aazam Ahmad, will be cooking up a treat, hosting live cooking demonstrations throughout the event which will include a 2 day quality food market.

Not to be out done on the music side, The Local has provided a smorgaboard of live acts catering for all musical tastes....

Saturday, 11th July is the music day, kicking off at noon & ending sometime around 4am with a storming set by Manchester's very own uber-DJs, Unabombers.

The Bluetones headline the mainstage stage in the Town Hall Square and will be serving up musical treats from a greatest hits set including Slight Return, Cut Some Rug, Marblehead Johnson & Bluetonic etc etc...

The events will take place across eight venues in the town and feature nearly thirty acts creating a diversity from several walks of the musical stratosphere, including folk, dance, non- classical, electronica, indie guitar & blues.

The fantastic line-up will include:- Erland and the Carnival, Magic Arm, Liz Green, Cats In Paris, The Suzukis, Denis Jones, Tim and Sam's Tim and the Sam Band, Sophie's Pigeons, Young British Artists, Ivan Campo, Gabriel Prokofiev and new emerging talent will be represented by Lost Knives, currently being chased by a multitude of record labels.

Rochdale will be doubly represented by Fat Northerner signing The Hidden Revolution and Zen Music's Blues troubadour, Will Tang.

Clint Boon, XFM DJ and Inspiral Carpet will be MCing/DJing on the mainstage keeping all the party people more than happy with some top quality tuneage.

This promises to be the best in good food & music.