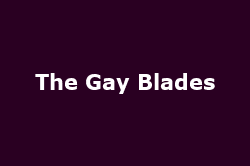 The Gay Blades are set to release the follow-up single to their acclaimed debut 'O-Shot' next Monday.

The guys last week played the last of their May/ June tour dates, with their next UK dates set to be in August at the V Festival in Chelmsford and Stafford on 22nd and 23rd August and a special Gay Blades BBQ date the day after on 24th August.

The New Jersey duo release latest single 'Not Having Done Nothing' on Monday 15th June via Something in Construction records. The video is available online now.