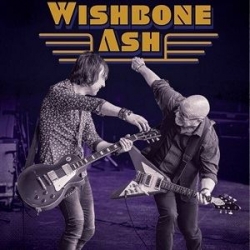 As part of the year long celebrations the band played an exclusive show and party at the Shepherds Bush Empire. Special guests Ben Granfelt, Mark Birch & Spam Spence did an incredible job and their contributions to the long history of Wishbone Ash shine as brightly today as they did then.

The Shepherds Bush show was more than a party, it was a celebration of the rich 40 year history of Wishbone Ash and a thank you to the fans who have supported Andy and the guys over the years. A lot has changed since the bands inception back in 1969, but the one constant? Andy Powell & his dedication to the music and the fans. It has never wavered. He may be the soul & inspiration of the band, but due credit must be given to Bob, Muddy, and Joe, for they are most certainly the heart.

As Part of the year long celebrations the rest of 2009 will see the band doing the following shows / festival / media: