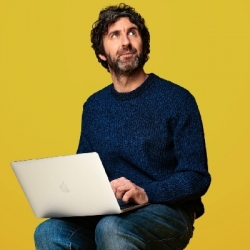 Twitter Comedy is the brain child of comedian Tiernan Douieb, who is the compere of the virtual gig. The first night will feature nine comedians - the compere Tiernan and Mark Watson, Pappy's Fun Club, Mitch Benn, Matt Kirshen, Rob Heeney, Carl Donnelly, Terry Saunders and Gary Delaney. Each comic has a ten minute twitter "set" for their 140 character tweets.

The comedians lined-up for the night had this to say about the event:

This will be a defining moment in comedy. Soon, no-one will ever tell a joke in any format other than 140 characters. We'll all save time - Mark Watson (Mock the Week/ Radio 4)

I can't wait for this gig. I'll be wearing my smartest phone - Matt Kirshen .

The best thing about Twitter Comedy Club is that it's just like a normal gig except comics only have 140 characters to tell jokes which is... - Tiernan Douieb