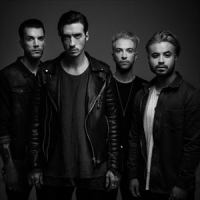 Young Guns have been added to Aiden's current UK tour in place of Tonight Is Goodbye who had to drop out for family reasons.

The Buckinghamshire rockers join Seattle's post-hardcore Aiden for their May/ June jaunt which started at the end of May. The tour takes-in The Joiners in Southampton tomorrow (5th June), then Manchester's Roadhouse, The Barfly in Camden, Birmingham's Bar Academy and finally the Cavern in Exeter on 9th June.

Tickets are still available for the Cavern date at Â£10 + booking, but all other dates are long since sold out.

As a result of their support slot, Young Guns will now take an earlier slot in Saturday's Camden Rocks Festival taking place across multiple venues this Saturday 6th June - playing the Barfly at 12:15. Other acts confirmed for Camden Rocks include ex-Libertine Carl Barat, Ginger from the Wildhearts, Nine Black Alps, Telegraphs and many more, including a DJ set by the Mighty Boosh's Naboo (Mike Fielding). Tickets cost Â£20 + booking.