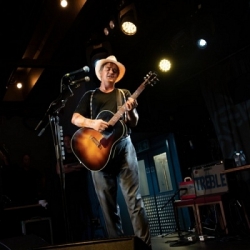 Pete Doherty has announced details of a new tour to take place in September as a showcase for his new material.

The Babyshambles rocker will play four solo dates later in the year, kicking-off in London's Roundhouse on September 19th, before Leamington Spa Assembly on the 20th, Manchester Apollo on the 21st, and finally Glasgow's Barrowlands on the 23rd of the month.

The announcement comes soon after Pete finished a UK tour in March and some more dates last week, and will close off the festival season. He and band Babyshambles are set to play all over Europe at events including Frequency, the twin Reading and Leeds festivals, and will hopefully be more famous for being a talented musician this summer rather than tabloid front covers and his chaotic lifestyle. His recent dates saw Graham Coxon join his solo band, so keep your eyes peeled for rumours of who could join him in September.