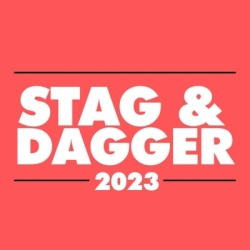 24 hour countdown until this year's three-day/three-legged Stag and Dagger Festival.

The S & D will kick off in London (where it all started last year) this Thursday May 21st, before heading to Leeds on May 22nd and Glasgow on May 23rd.

London will see the likes of Evan Dando, Micachu and The Shapes, Casio Kids (the latter both of whom will also play in Leeds the following day), CSS godly frontwoman Lovefoxx, Nik Nik Nik, We Have Band and others take to the stage at various Shoreditch venues. In Leeds, will be the opportunity to see King Creosote, Youth Attack and Male Bonding, while Glasgow will host The French Wives, BMX Bandits, as well as the American garage punksters of Black Lips alongside Mika Miko at the Classic Grand, where entry will be limited to the first 100 wristband holders. You'll also have three chances to catch Dananananaykroyd, Everything Everything, Cold War Kids and White Denim, who will perform on all three days. There are still a few tickets up for grabs, costing £16.50, available to over 18s only, except in Glasgow where under 18s can purchase tickets at £8.50.

Each ticket grants access to all music events across the hosting city.