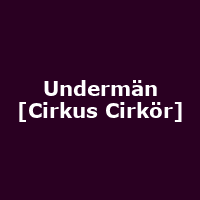 Cirkus CirkÃ¶r are going to hit the road with latest show 'Inside Out' this autumn, marking it's debut performance outside of it's Swedish home.

The contemporary Stockholm-based performance troupe were formed in 1995 by Tilde BjÃ¶rfors - partly inspired by Canada's Cirque du Soleil. 'Inside Out' is the second part of a trilogy exploring the body and soul's possibilities - part one was '99% unknown' and hit the world stage in 2004. Deemed as both a "tribute to technical circus skills and magic", the show is filled with heart and energy, following the tale of two people - one driven by success, the other by logic and backed by a live orchestra.

The show hits the UK on 14th October for two-and-a-half weeks at London's Peacock theatre. Tickets range from Â£10 to Â£36 and will be on sale this Monday (18th May) at 9AM.