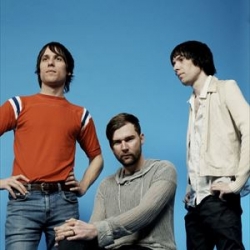 Recently Johnny Marr-ed up The Cribs have today announced a UK tour for September and October.

The Wakefield quartet, featuring the Jarman brothers and (as of last year) ex-Smiths guitarist Johnny Marr are currently working on their as-yet-untitled fourth album - the follow-up to 2007's 'Men's Needs, Women's Needs, Whatever'.

Tickets will be available from this site at 9AM tomorrow morning (Weds 13th May).