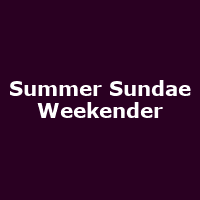 Plus Drowned in Sound announce Dananananaykroyd, Fanfarlo and My Latest Novel for the Friday night Rising Stage.

And the surprises keep coming. Hot on the heels of our previous announcements that the starred likes of Mystery Jets, Chairlift, Future of the Left, Dan Black, Saint Etienne and more were joining our headliners Bon Iver, The Charlatans, The Zutons and The Streets for this year's Summer Sundae Weekender blowout, we now have news that will, in all probability, knock your socks off with excitement.

Where to even begin? What about with the addition of the inimitable Jenny Lewis, in her only UK festival appearance this year? Critically adored, both for her work with Rilo Kiley and her solo career (for who could ever forget the classic "Rabbit Fur Coat"?), universally worshipped and prodigiously talented, Ms Lewis is sure to hold the crowd in stupefied awe with her singular voice, heartbreaking songs and yes, let's face it, her ethereal beauty. And she's not the only one. We can also announce that Next-Big-Things-turned-Current-Hot-Things The Airborne Toxic Event have joined the bill. You may not have heard the name, but you certainly would have heard their ubiquitous hit single "Sometime Around Midnight", a perfect exemplar of their knack of combining heart destroying lyrics with grand, uplifting rock and roll. Speaking of which, the immortal Idlewild are back, and hitting up Leicester with the full force of their spiky, effervescent brand of rock, both from their untouchable back catalogue (for who could ever forget the anthems that were "When I Argue, I See Shapes", "I Am a Message" and the like) and from their imminent studio album. This year's festival will also see the return of the New Beautiful South, down a member (that would be Paul Heaton) but no less gloriously melodic and beautiful than before.

Which is not to say there won't be music to dance to. Enter Mr Hudson, riding a wave of hype after none other than Kanye West declared him the only other musician "with the ability to annihilate me", with his single "Supernova" set to go, well, supernova this summer. The irrepressible Filthy Dukes, will be bringing their distinctive blend of "electroacidhousenuravetwisteddiscopunkfunk" (their words) to Leicester and, in effect, get the shebang well and truly started, along with hip hop rudeboys Kid British, widely hailed as the best new band in Manchester. Stephen Street-produced young guitar rock tykes Flashguns will also be storming the stages, as will the deliciously louche, wildly addictive retro pop stylings of The Cheek (or Cheeky Cheeky and the Nosebleeds, as they used to be known) and rough and ready Scottish indie types The Dykeenies.

For those who need a breather, there's mellower, lushly beautiful stylings from the legendary likes of 27-year old folk wunderkind Devon Sproule, the wickedly acerbic and highly original Emmy the Great, and the quirkily innovative singer-songwriter David Thomas Broughton, who uses samples, looped guitars and drum machines to create his idiosyncratic vein of folk music.

And there's much more besides. For something a little different, check out Easy Star All Stars, reggae musicians who "reinterpret" seminal albums like Pink Floyd's "Dark Side of the Moon" and Radiohead's "OK Computer" in their own offbeat dub style, or the Israeli garage rock racket of Monotonix who will be eschewing the concept of normal staging by setting up in the middle of De Monford Hall's floor! And don't forget the Phrased and Confused stage either, with performances from hotly tipped UK chanteuse Beth Jeans Houghton and Transgressive Records poster boy Jeremy Warmsley, among others.

Finally - the hugely influential music website Drowned in Sound have just made their first round of announcements for Summer Sundae Weekender, and it's a corker, with the brilliant - and brilliantly diverse - triumvirate of Fanfarlo, Dananananakroyd and My Latest Novel confirmed as the very first acts for their Friday night stage at Summer Sundae Weekender. Fanfarlo are a swoonsome London sextet that miraculously collapse everything from Arcade Fire-type arrangements, Belle and Sebastian-esque loveliness and pure pop ingenuity into a sound that is defiantly, and deliciously, their own. On the opposite end of the spectrum sit Dananananakroyd, who, from their wilfully obtuse name to the fact that they have not one, but two drummers drumming away furiously in unison - firmly buck pop convention with mischievous glee. And then there is My Latest Novel, a Scottish five-piece crafting swooping, delicately romantic gems to melt the heart.

Added all up, it becomes one of the most thrilling and compelling festival lineups you're likely to find anywhere this summer. Time to book that ticket to Leicester? You know it...