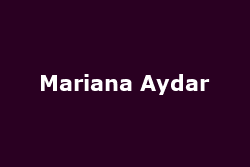 Guanabara, in association with Jungle Drums magazine, launch their Spring Season with an exclusive show from Mariana Aydar on Tuesday 19 May 2009, who celebrates the launch of her upcoming album, 'Peixes, Passaros, Pessoas' (Fishes, Birds, People).

Her debut album, 'Kavita 1', meaning 'poet' in Sanskrit, saw her work with Mario Caldato Junior, who has collaborated with the Beastie Boys, Beck and BjÃ¶rk.

In Brazil, Mariana has established herself as one of the most promising voices of her generation, shifting from samba to forrÃ³ and beyond with a mix of original material and famous Brazilian pop classics.

Seu Jorge personally invited her to open for his show in Paris a couple of years ago, and the legendary Daniela Mercury - who played at Guanabara last year - also requested her to provide vocals for her performance at the Bahia Carnival.

Mariana debuted in folk star Miltinho Ediberto's band in 2000, which led to her forming Banda CaruÃ¡ with Chico CÃ©sar and VirgÃ­nia Rosa. She was a part of the Elba Invites project a few years later, where she performed with Samuel Rosa (Skank), Toni Garrido (Cidade Negra), Trio Virgulino and Arnaldo Antunes. Her influences include JoÃ£o Nogueira, Jackson do Pandeiro, Marina Lima, Lulu Santos and Lenine.

Mariana releases her sophomore album, 'Peixes, Passaros, Pessoas' in May through Wrasse Records.