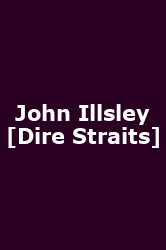 The legendary rock venue that hosted the dawn of the British R & B movement in the 60's will be playing host to a unique, one off performance by Dire Straits co-founder and bassist, John Illsley. John will be showcasing material from his latest album "Beautiful You" which features singer/songwriter, Greg Pearle. This follows Illsley's triumphant return to the stage in 2008, which included a sell - out performance at West London's, Bush Hall.

John Illsley and Greg Pearle started 2009 with a session on the legendary Bob Harris Show, BBC Radio 2. Last year they released the critically acclaimed 'Beautiful You' album, which was recorded in Mark Knopfler's studio. The album mixes elements of classic Straits song writing with a rich new sound, perfectly showcasing Greg Pearle's raw and emotional vocals. John and Greg toured extensively in Ireland and performed a sold out, one off special gig at Bush Hall, in London. John and Greg have just announced this one off gig at the 100 Club, London, on 23 June - as a precursor to touring the UK, Ireland and Europe in the autumn of this year. John will be releasing 'Secret Garden' in June 2009 which is taken from the album 'Beautiful You'.

Illsley also launched a new website (www.johnillsley.com ) with a unique twist - selected songs from 'Beautiful You' were initially available to download for free - and proved so popular that a new server was necessary to deal with the high traffic from all over the world. The planned touring activity comes as a direct result of this demand.

John, from the legendary, 120 million selling group - Dire Straits, first met Greg Pearle in March 2005 when Greg was fronting Irish band Cunla, in a pub in Leicestershire. John took to the stage for the first time since 1993, joining the band to play a couple of Dire Straits' numbers. John was immediately captivated by Greg's unique voice and style. The result was a two-year collaboration, and John's first studio album for 15 years.

John and Greg are currently working on new material, for their second album together. John also continues to paint prolifically and a June exhibition in Chelsea to coincide with the 100 Club show will be announced shortly.