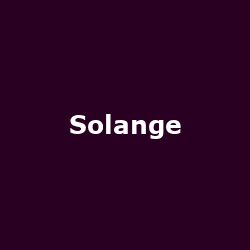 Solange Knowles and her band The Hadley St Dreams come to the UK in May to play a host of initimate dates, which see will see Beyonce play host. Please see dates below.

The tour marks the release of her brand new single T.O.N.Y", taken from her fantastic album Sol-Angel & The Hadley Street Dreams, which debuted at #9 in the US charts. T.O.N.Y is co-written by Solange and Cee-Lo from Gnarls Barkley I ran into Cee-Lo in a club and begged him to come and listen to the album in the car after the club, and from there he was on board. We wrote and recorded T.O.N.Y and Sandcastle Disco that next week. Currently No.8 in the Billboard Club Play Chart in the US, T.O.N.Y is already a dance floor smash.

Recently Solange wowed audiences and international music critics at this years SXSW festival where she received rave reviews from the gathered media including the NME who said she delivered a strong set and won over the crowd. She was also invited personally by celebrity blogger Perez Hilton to play another storming live set at his closing party. UK fans will be able to see Solange perform live next month on a series of exclusive dates throughout May and June, to be announced.

A multi-talented performer, Solange has developed into a notable singer, songwriter and actress, with some fantastic achievements already under her belt. The latest talent from the Music World stable, she co-wrote Beyonces Get Me Bodied and Upgrade You from Beyonce B-Day album, Love Off for Kelly Rowlands Ms Kelly and Michelle Williamss club smash We Break The Dawn.

If I had to describe the sound of my record, says Solange, I would like to think that it is as if The Supremes, The Marvelettes, Dusty Springfield and Minnie Riperton were to make the music they did in the 60's and 70's now with a modern touch. Her album also includes collaborations with the likes of Pharrell, Jack Slash, The Boards Of Canada, Mark Ronson, Q-Tip, Raphael Saddiq and the legendary Lamont Dozier.

The brand new video to T.O.N.Y is available to watch online now and features cameo appearances from Cee-Lo and Kid Cudi. A set of killer remixes are also coming, courtesy of Mark Pichiotti and Lost Daze.