Elbow set for one-off Manchester Arena date before clocking-off until next album! 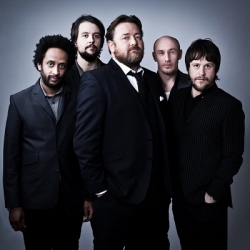 18th September 2009 will probably be the last chance to catch Elbow live in 2009 before the band knuckle down to record their fifth studio album.

The 2008 Mercury and 2009 Brit award-winners will play a massive homecoming gig at Manchester's Evening News Arena, which will be their largest ever headline date. The band also step-out in summer for the Manchester International Festival, the V Festival and for two U2 support slots.

Don't expect the next album to be coming anytime soon, though, as lead singer Guy Garvey is quoted in the NME as expecting to "disappear for a couple of years to work on a new record".

Tickets for the 18th September will cost £25 + booking fee and date go on sale this Friday (1st May) at 9AM.