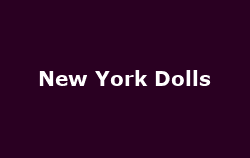 The New York Dolls have confirmed that they will perform songs from their highly anticipated new album 'Cause I Sez So on the popular British music TV show "Later with Jools Holland". The show will be aired live on Tuesday May 12th at 10pm on BBC2 television, followed by a pre-recorded edition of the show aired on Friday May 15th at 11:35pm.

The Dolls' new album is released in the UK on Monday May 4th on the Atco label through Rhino. This is the fourth studio album for the Dolls in 36 years, and sees the band reunited with their original producer, Todd Rundgren (Meatloaf, Psychedelic Furs, XTC, The Tubes, Patti Smith Group).

Whilst in London the Dolls will attend an album signing at 1pm on Thursday May 14th at HMV', Oxford Circus. One lucky person who attends the HMV signing will be eligible to win a pair of tickets to see the Dolls perform a sold out show at the legendary 100 Club later that night. The signing will take place at HMV Oxford Street - 150 Oxford Street, London, W1 1DJ.

More info on their forthcoming Later with Jools Holland appearance can be found here: www.bbc.co.uk/later/