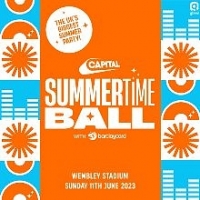 Announced so far for this massive event at Emirates Stadium are The Saturdays, Leona Lewis, Calvin Harris, Akon and Kelly Clarkson plus a band who are to announce thie reunion especially for the gig - more info to follow tomorrow.

The event takes place on Sunday 7th June, starting at 2PM at Arsenal's Emirates Stadium - arguably one of the nicest stadiums in the UK. Capital FM will make a donation of Â£100,000 to Help a London Child from the proceeds of the event.

Blue announced on Tuesday that they will reform and perform at the ball, along with Lionel Richie and 'Nothing but your t-shirt on' Shontelle, the X Factors's JLS, Katy Perry, Daniel Merriweather with Mark Ronson, Ciara and Enrique Iglesias.

Despite the event being reported as "sold-out", there are still a few tickets remaining at face value (Â£45). Check the "tickets" link below for availability.