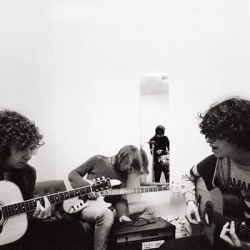 Coming from Brighton, the Kooks have just announced two shows that won't involve too much travel, being that the dates are in the nearby seaside towns of Margate and Bournemouth - the Winter Gardens on 16th July and Bournemouth Opera House on 17th July.

Tickets, costing £22.50 are available now. The boys are also playing at this year's Eden Project, as well as alongside the Killers at Hyde Park Calling.