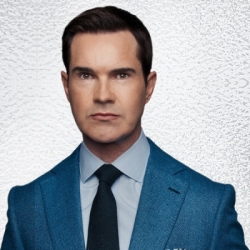 With the announcement of the new Jimmy Carr dates, I reckon 8 out of 10 cats, and anyone with a sense of humour for that matter, will be after these tickets like a shot. We all need a laugh during these tough old times and Carr is a master of anti-misery and a wizard of the darkest wit, sharp and cutting.

The 'Rapier Wit' tour starts at the Edinburgh Festival Fringe on 20th August at the EICC for eight dates, then takes in the seaside towns like Plymouth, Worthing, Bournemouth and Blackpool as well as established cities like Manchester, Brighton and York. See below for details - rest assured this show will be very very crude and very very offensive.....excellent then.

No under 16's will be allowed admission to the performances - so no high-pitched squealing, sulking into a vortex of polyester hoody-land with trousers held up by magic and no inane ring-tones designed to disperse the human race at inopportune moments....oops I appear to have just caught a slip of the Carr acerbic tongue there! Anyhow, the tour stretches as far as December when the Hounslow harridan plays 3 dates at the Hammersmith Apollo from the 11th to the 13th. Best get those tickets now then - they are on sale now!!