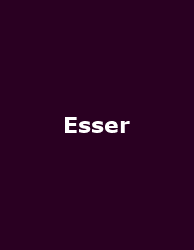 Due to a schedule clash, Esser has had to postpone his forthcoming London ULU show (originally due to take place on Thurs 30th April). Tickets will be valid for the newly announced date (more info when available for the date).

On the upside: there is now a free Esser gig for Timeout being held at the Barfly in London the following day on Friday 1st May - a few days before the release of debut album 'Braveface' - out on Monday 4th May.