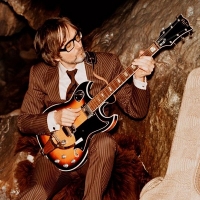 Jarvis Cocker has announced details of the release of Angela, a track taken from his forthcoming second solo album on Rough Trade, 'Further Complications'.

The track is now available as a free MP3 download from his site, www.jarviscocker.net

It will also be available in the UK as the lead track on a highly limited-edition compilation cassette of various artists to coincide with Record Store Day on April 18th and as a limited edition 7" on June 15th featuring the exclusive b-side 'I Found Myself Looking For God'.

The album, 'Further Complications' will be released on May 18th 2009.

Jarvis has also announced a series of dates in June to coincide with the release of the album (see below).