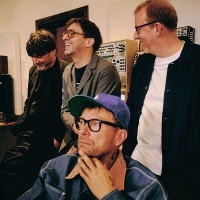 Just as they got us all excited about this week's Hyde Park gig support announcement, Britpoppers Blur have only gone and announced details of two intimate UK shows this summer!

In the lead-up to the summer gigs, fans were informed that the quartet will play two preview gigs - one in Colchester and one in London. Blur's first-ever gig was played at the East Anglian Railway Museum in Colchester way back in 1998, which is where they will duly return on Saturday 13th June. The second gig will see the band take to the stage at London's Goldsmith's College on Monday June 22nd. All proceeds from both shows will go to the East Anglian Railway Museum charity and Aldham Village Hall Restoration Project, and the Teenage Cancer Trust. Nice blokes, Blur.

A variety of acts are to support the quartet at their two Hyde Park (London) shows on 2nd and 3rd July, changing on each night. July 2 will see Foals, Crystal Castles, Friendly Fires and Hypnotic Brass Ensemble as support, whereas July 3 will feature Vampire Weekend, Amadou & Mariam, Florence And The Machine and Deerhoof. The foursome, fronted by Damon Albarn, has been away working on numerous solo projects since an informal break-up in 2004.

Both shows have extremely limited availability and are exclusive to fanclub members registered at www.blur.co.uk . Tickets are Â£25 each and are on sale from 9am today.